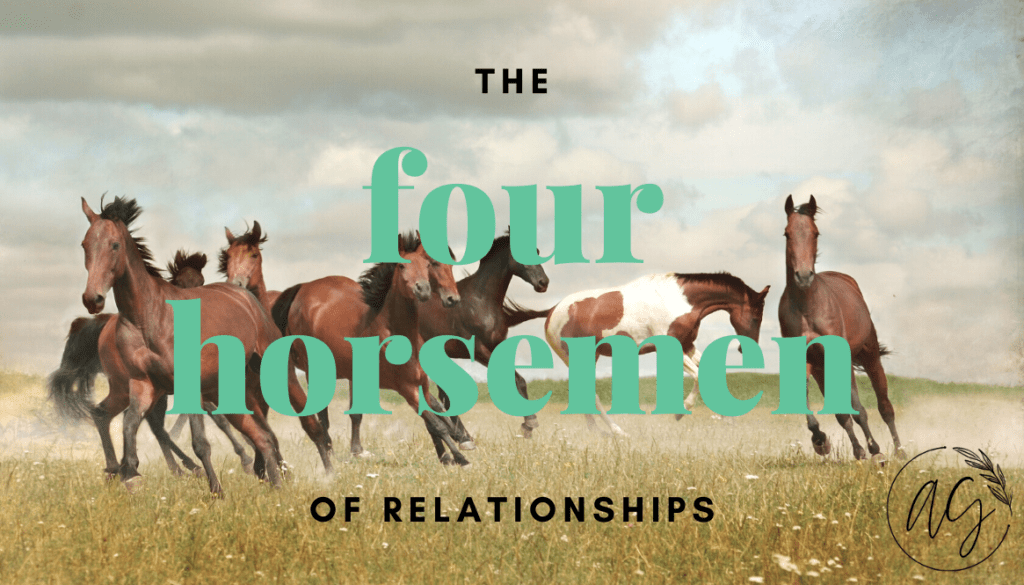 The Four Horsemen of Relationships

You might have heard of the four horsemen of the apocalypse, a biblical reference signaling the end of times. In his research on long-term satisfying relationships, John Gottman and the Gottman Institute identified for communication patterns that signaled the end times for couples. Those are the horsemen we will explore here.

View all blogs about couples

The four horsemen are: criticism, contempt, defensiveness and stonewalling. Let’s look at each of them more closely.

Criticism - This is defined as attacking your partner's personality or character. This is usually done with the intent of making someone right (you) and someone wrong (them).

Examples of criticism: "you always," "you never," "you’re the type of person who," "why are you so…"

Contempt - This is described as attacking your partner's sense of self with the intent to cause insult or psychological harm/abuse. Contempt is felt as resentment. Passive aggressive communication can be an expression of contempt.

Examples of defensiveness:
- Making excuses such as blaming external circumstances beyond one’s control and denial of responsibility or behaviour
- Cross complaining by meeting your partner's complaint or criticism with a complaint of your own and ignoring what your partner has said
- Disagreeing and then cross complaining, such as denying and then rationalizing or blaming the other person
- Yes butting (rationalizing) where you start off agreeing but end up disagreeing: "yes, but..."
- Repeating yourself without paying attention to what the other person is saying. This can also come across as contemptuous/resentful
- Whining “it’s not fair”

Stonewalling - Withdrawing from the relationship as a way to avoid conflict. Often someone will think that they are withdrawing to be neutral although sometimes it is used as punishment. Stonewalling conveys disapproval, icy distance which creates a sense of insecurity, separation, disconnection, and can come across as being smug.

Examples of stonewalling: stony silence, monosyllabic mutterings, changing the subject, physically removing yourself from the situation, giving the silent treatment

Experiencing any of these are as unpleasant as they sound. There are some important points to make about these different types of communication. Firstly, your style of communication during relationship conflict is often times going to be similar to what you experienced in your family home. If indirect communication is often used, you might be more prone to passive aggression or even submissiveness. From a biological standpoint, male bodied people are more likely to demonstrate stonewalling than female body people and this relates to both sociological factors and biological factors which the Gottman's describe in their research.

There are plenty of ways to resolve conflict including taking a break at the first signs of temper rising, and practicing self-soothing through progressive muscle relaxation, visualization, breathing techniques, and physical exercises. Here are the antidotes to each of the four horsemen:

Learn to state your needs using eye statements to make a specific complaints and request without blaming your partner or using the word “you.”

Contempt: Express your feelings and needs.

You can also protect your relationship from resentment by building a culture of appreciation and gratitude. Understanding and speaking your partner‘s love language and apology language can be helpful here.

Even if you fully believe you are not to blame, and even if this is objectively true*, it will help your relationship to take responsibility for even 5% of your contribution to the conflict. Own up to raising your voice, rationalizing, denying responsibility or cross complaining. Don’t do this in anticipation of your partner taking responsibility in turn, because that’s not guaranteed.

*Habitual conflict, criticism and resentment can indicate a verbally abusive relationship. If you experience frequent conflict, speak with a neutral third-party with your partner. This could be a couples therapist, a pastor or priest, or a mutual close friend. These relationship patterns have an opportunity to be resolved if you are both willing to work on the relationship and make some changes.

Go for a walk, do an intentionally relaxing activity, engage in exercise to burn off adrenaline, play with a pet. Make a list of your favourite relaxing activities that you can use when you need to self-soothe. 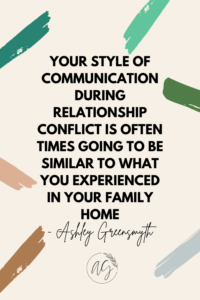 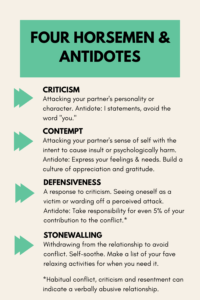 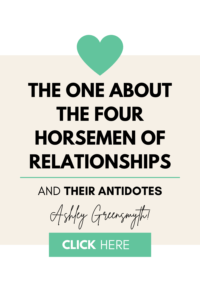